Fond memories of a wildlife and conservation legend

Dr Ian Whyte is a true legend. He arrived at the Kruger National Park as a young man who was to start at the bottom in research . There he spent 37 years in research, attained his degrees with distinctions and combined this with an adventure filled life of meaning and purpose. In his own repeated words in his book "Living the Wild Life", a totally absorbing read, he "lead a privileged life". We disagree though, he lead an enviably privileged 99 lives. We had the privilege, late in 2020, of meeting Ian, his wife Merle and wonderful and conservation science graduate son Neil and daughter in law Natasha, resident management couple at Savanna Lodge, a totally fantastic place in the Western Sector of the Sabi Sand, when they presented our guests with signed copied of his book.

For the past week or so, we have been having the most glorious weather, cloudless and windless, crisp in the mornings but neither too hot nor too cold. Weather like this at this time of year always irresistibly draws my mind back to those wonderful days in Kruger when annual aerial censusing would begin. Conditions would be becoming optimal for this work. Day after day of perfect weather, trees losing their leaves, improving visibility, and the animals beginning to concentrate near water. On mornings like these, flying is pure pleasure. There would be no turbulence, and flight was smoother than driving on the freeway as we headed out to cover some predetermined area. The hours spent in the air were never without interest. The census teams were always made up of young men and women from the conservation departments who were well qualified in their chosen fields of expertise – botanists, pedologists (soil science), ecologists, zoologists, ornithologists (and a few other kinds of “…ologists”!), and some of Kruger’s seasoned game rangers with many years of experience. All were passionate about their work, and excited to be doing what we were doing. The census team would be booked into a rest camp with an airstrip, and situated close to the area that we were censusing. Evenings would be spent around the braai fires, and the campfire talk was always lively. Some topics were light hearted and amusing, others on more serious subjects related to our work which would produce much debate. Given the mix of expertise, these were excellent forums for learning and development of new ideas pertaining to the management of Kruger. I am sure that I learned more about ecology and the functioning of ecosystems around these fires than I ever did from formal education. And the basics of some of the wildlife management policies which are still in place today were also conceived during these camp fire debates. In the early years I was a regular member of these crews, but was later to obtain a pilot’s license myself, and coordinated and conducted many of these surveys from the pilot’s seat. Various censuses were conducted in those days, starting in the early 1970s. Initially they were known as Ecological Aerial Surveys (EAS) when the whole park would be intensively covered using a fixed-wing aircraft (the photo below is of one of the aircraft used - a Partenavia P68 "Observer". This aircraft had a glass cockpit like a helicopter and was a joy to fly. (Photo by Raymond Travers). These took about 3½ months to complete. This became too expensive both logistically and economically, and they were replaced by Aerial Line Transects (ALTs) in which only a predetermined percentage of the park would be covered. Also, a special census of the elephant and buffalo population was conducted annually. These were conducted by helicopter. These two species are much more visible and we could fly at a greater height above the ground and cover the area much quicker. This census would take three to four weeks. Finally a hippo census would also be conducted annually. These were the best of all. Flying low level along each of the Park’s major rivers at the height of the dry season was always of absorbing interest. Much more than just hippo would be counted, and they would perhaps better be called river surveys. Hippos, crocs and the larger water birds - herons, geese, lapwings and stilts would also all be recorded. Sadly, these censuses are now only a part of Kruger’s history, as they are no longer conducted, but I am forever grateful that I could have been part of them. The wonderful results of these surveys gave us all a much greater understanding of Kruger and its ecosystems. I devoted a chapter of my book “Living the Wild Life” to these absorbing aerial censuses and their results, and to the more general aspects of flying in Kruger. The second photo is of the book's back cover with some of the comments made by readers. The book can be obtained by sending an email to merle.m.whyte@gmail.com. 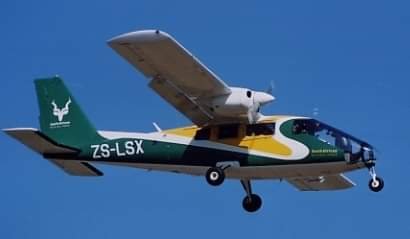 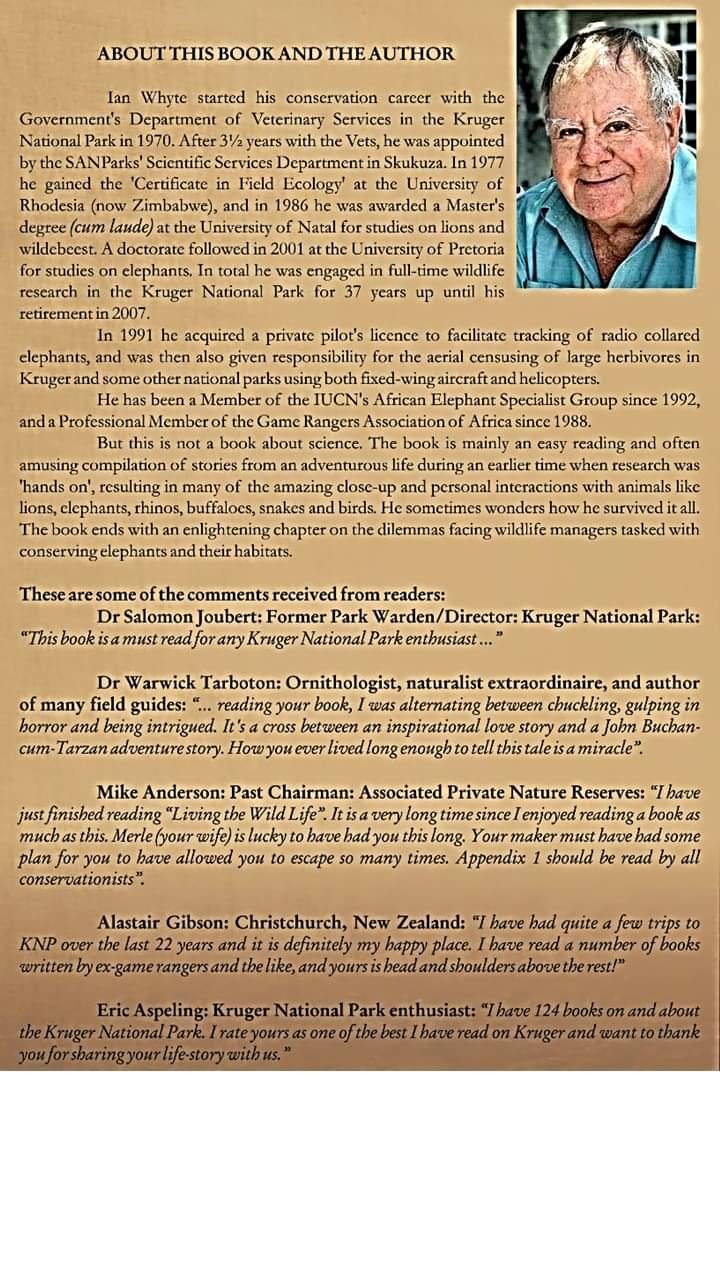 Dr Ian Whyte Living the Wild Life A life fully lived Ian Whyte Wildlifes heroes conservation champion elephant expert
A few simple rules to help you not to miss those action wildlife shots.
Ever feel creative block? Some simple techniques that can help you.
Into the RIGHT gear
Comments